This section provides an example of local coastal governance in the case study area of Tordera Delta, Spain.

Protection activities in the coastal public domain area are managed at the national level. Landwards of the coastal public domain, the regional Autonomous Community authorities – i.e. the Government of Catalonia – are responsible for land use planning as well as beach quality assessment and control. The Government of Catalonia has recently re-evaluated the Master Urban Development Master Plan for the Coastal System (PDUSC) with special attention to campsites located in areas close to the shoreline that could be affected by the impact of coastal erosion. The complex map of competences has impeded the design of an integrated plan and led to conflicts within the various administrations. Interviewed coastal stakeholders have noted the lack of a clear legal and administrative framework as well as coordination between the different government bodies. Furthermore, there is an absence of adequate structures to protect local populations from the joint hazards of erosion and inundation.

This situation has left local stakeholders such as camping site owners to negotiating ad-hoc solutions themselves, including self-made sea walls. In response, the central government has launched a process to study the problems in the Tordera Delta area and to consider solutions at different time scales. The process includes the participation of different stakeholders. However, it is not entirely inclusive as the less popular aspects of the proposals (e.g. the redefinition of legal setbacks) are absent from the main discussions, presumably to avoid confrontation. Participants include representatives of the various governments (central, regional, and municipalities of Blanes and Malgrat), affected stakeholders (representatives of campsite owners at the north and south of the Tordera river), and the Universitat Politècnica de Catalunya as the technical/scientific partner.

Tordera Delta is located in the Catalonia River Basin District, which is one of 25 river basin districts in Spain. The main hazard identified in Tordera Delta is coastline erosion, which subsequently increases the magnitude of coastal floods and the direct exposure to wave action. The Government of Catalonia through the Catalonia Water Agency (ACA) has delineated the risk areas associated with events of time return of 10, 100 and 500 years. Although river flooding poses a risk in the Tordera Delta, the stakeholders classify coastal flooding as a much higher priority. The Civil Protection Plan for Risk of Floods in Catalonia (INUNCAT) for the Catalonia region serves as the chief flood risk management plan.

In the case study area, campsite owners (both from the Blanes and Malgrat locations) usually undertake coastal prevention and mitigation measures without the involvement of the central government. The autonomous technical measures include building rock seawalls and sandbagging around their properties. The central government have carried out different measures e.g. beach nourishment, with differing degrees of success. Most interviewees perceive the approach to flood protection as piecemeal with no integrated long-term planning.

The Government of Catalonia is the foremost authority responsible for civil protection in Catalonia, though it does share some competencies with municipalities. Local administrations have their own structure and legislation, including risk assessment plans and for operational units.

The main non-governmental actors in the Tordera Delta are beach campsite owners. As private stakeholders, campsite owners have no legal competencies. Nevertheless, some of them have (illegally) implemented coastal protection measures against erosion and flooding to protect their properties. Depending on their location in the Malgrat or Blanes municipality, campsite owners have been differently affected by central government initiatives to mitigate coastal erosion. Temporary beach nourishment measures in Malgrat, for example, have satisfied owners who are appreciative of the interaction with the Coastal Office and the attention for their concerns. Nonetheless, the campsite owners are clear of the need to maintain this level of attention to the issues and to search for more permanent solutions.Meanwhile a Blanes campsite area, closest to the mouth of the river,was classified as a “natural evolution area.” The decision to mark it for managed retreat was disappointing to campsite owners.

The Universitat Politècnica de Catalunya – BarcelonaTech (UPC) maintains continuous interaction with government at three levels (central, regional and the municipalities of Blanes and Malgrat) and with the main private stakeholders in the area (campsite owners). In the recent coastal protection project, which included a bottom-up participatory process, the UPC served as independent technical advisor.

The graphic below provides a snapshot of how governance in Tordera Delta is perceived by those living and working in the area. The responses are the result of  in-depth interviews conducted with four coastal stakeholders from three stakeholder groups (SH1,2,8) presented in the list on the right.  Interviewees who commented on the mode of governance are plotted on the graph on the left. As these interviews come from a reduced number of interviewees they are not necessarily representative, but provide a snapshot of local opinion. 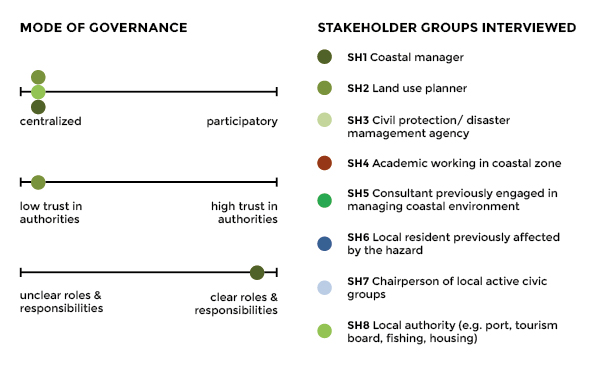 Interviewees noted that administrative levels had difficulties in coordinating clear roles and responsibilities. This view was not unanimous, however, as a coastal manager observed the opposite. In general, interviewees agreed that governance was centralised with limited opportunities for participation. With a lack of clarity at times about who is responsible and an impression that coasts are a low priority for the administration, a low trust in authorities is notable.

The complexity of official competences for coastal management and limited dialogue has created confusion among stakeholders as to who is responsible when and for what. In interviews, a representative of the central government cited the Catalan government as the competent authority, while a local expert cited the central government. The number of administrations involved also creates a lot of bureaucratic paperwork. There is no permanent committee where all authorities involved could be represented. The lack of proper coordination and dialogue between administrative levels appears to contribute to inaction.

Catalan planner sees no dialogue and State not fulfilling its role

In general, interviewees highlight little engagement and activity from all sides of the administration. Stakeholders perceive a lack of interest and low social concern from both the administration and public, who are seen to have other priorities for scarce financial resources and do not see the benefits or the need for such protective measures.

Technical staff more involved in bureaucracy than in measures

There is additionally a lack of public awareness and low priority for risk reduction measures. This is most likely due to the limited public information available and public engagement in risk reduction measures and plans thus far. Most actions have been taken by campsite owners, along with municipalities, but with a near-term perspective.

Campsite owner: Administration responsible for coasts, but no money and low priority

Difficult to prioritise coasts because of low social concern

The following table provides a list of local policies for coastal management and disaster risk reduction in Tordera Delta, Spain.