This section provides an example of local coastal governance in the case study area of Kieler Fjord, Germany.

As noted in the overview of governance in Germany, the organisation and administration of coastal defence is the responsibility of the coastal federal states. The Kieler Fjord is situated in the federal state of Schleswig-Holstein. The federal state Ministry of Energy, Agriculture, the Environment and Rural Areas (MELUR) of Schleswig-Holstein is the main responsible authority for coastal protection, flood control, climate protection, nature conservation and environmental protection. Coastal protection activities are distributed across three out of six departments:

The MELUR is also in charge of the State Agency for Agriculture, the Environment and Rural Areas and the Government-Owned Company for Coastal Protection, National Parks and Ocean Protection.

The MELUR has an inter-ministerial working group (IMAK-IKZM) on Integrated Coastal Management (ICM) and a central coordination unit for ICM is housed within the Ministry of the Interior – Department of Spatial Planning. This unit serves as source of information for other departments and for the regions and local authorities in Schleswig-Holstein and is networked with neighboring coastal federal states and with the federal government.

The Schleswig-Holstein Ministry of Economic Affairs, Employment, Transport and Technology also leads an inter-ministerial steering group which spearheads the federal state initiative “sea our future” (Zukunft Meer) to make the region a model for maritime governance. A Maritime Coordinator, appointed by the federal state government, also acts as an interface between science and industry in the area of coastal management.

Coastal and flood protection in Schleswig-Holstein has always been of particular importance and there is a centuries-old tradition of dike building along the coast to reduce flood risks. As a result of the preliminary assessment under the EU Floods Directive, areas with potentially significant flood risks were identified for the Schleswig-Holstein part of the FGE Elbe, the FGE Schlei / Trave and the FGE Eider river basins.

Around 25 % of the territory of Schleswig-Holstein is at potentially significant flood risk due to the penetration of sea water. In accordance with the EU Floods Directive, the federal state produced flood hazard and risk maps in 2013 and flood risk management plans in 2015 for the river basin units Elbe, Eider and Schlei/Trave.

Disaster risk reduction (DRR) management in Schleswig-Holstein is organised through a variety of public authorities with responsibility at different levels. In case of a disaster, the Ministry of the Interior of Schleswig-Holstein is responsible for discharging central tasks and coordinating a response if more than one district is affected. This is commonly the case during flood events. The lower level DRR authorities act in their given district or city if the disaster is limited to only their sphere of influence. For the Kiel Fjord area, the districts of Rendsburg-Eckernförde and Plön, as well as the City of Kiel, are the responsible authorities.

The Kieler Fjord site has an array of non-government and private actors involved in coastal governance. These include commercial groups, nature conservation associations, and disaster and relief NGOs.

The Naturschutzbund Deutschland (NABU) is one of the most active environmental NGOs at the national level. The NABU has a critical view on socio-economic developments in the Kiel, but has no direct link to the case study area of the marina itself. As a recognized nature conservation association, the NABU has the legal right to inspect expert opinions and planning documents in the framework of planning procedures. NABU is actively engaged in planning processes around the Kiel Bay area e.g. in relation to the construction of a tunnel connecting the Fehmarn Belt between the German and Danish coasts.

Several national-level NGOs are part of the disaster management infrastructure and enjoy high levels of national recognition. The Deutsche Gesellschaft zur Rettung Schiffbrüchiger (DGzRS) is the most important NGO in Germany active in disaster and search and rescue operations in the North Sea and Baltic Sea. The Deutsche Lebensrettungsgesellschaft (DLRG) is another such NGO active in life saving operations on public beaches. The Technisches Hilfswerk (THW) specializes in technical assistance during disasters, e.g. by defending dykes with sandbags, evacuating people and making roads passable. All of these NGOs have a strong connection to the authorities and are well integrated into governmental DRR management.

The Freiwillige Feuerwehr (Voluntary Fire Service) is an important local- to regional-level NGO for firefighting and flooding disasters. The Freiwilige Feuerwehr assists during flood and storm events with activities such as pumping cellars and removing fallen trees from roads. The organization is located in nearly every town and village without a professional fire brigade.

The Sporthafen Kiel is a group of commercial marinas situated around the bay of Kiel offering watersports and sailing activities. Sporthafen Kiel is well known and seen as an important part of the local economy. It has shown interest in taking action to protect its assets from storm surges and is considering awareness raising activities. The group has little contact with the authorities but is engaged with boat owners and sailing clubs in the area through annual meetings.

There are also a number of private sector actors invested in coastal management. Marina Wendtorf is an important private commercial marina on the outer Kieler Fjord. Marina Wendtorf provides over 850 berths for leisure boats. It has already renewed parts of its infrastructure in 2015/16 by replacing its fixed height wooden piers with floating piers that can adapt to changing water levels.  Wassersportvereinigung Mönkeberg is a private yacht club managing its own marina which has been previously affected by storm surges. Neither Wassersportvereinigung Mönkeberg nor Marina Wendtdorf have much contact with government authorities but both are open to information exchange and are interested in making their infrastructure more resilient.

The graphic below provides a snapshot of how governance in Kieler Fjord is perceived by those living and working in the area. The responses reflect in-depth interviews conducted with eight coastal stakeholders from six stakeholder groups (SH2,3,4,5,6, 7) presented in the list on the right. Interviewees who commented on the mode of governance are plotted on the graph on the left. As these interviews come from a reduced number of interviewees they are not necessarily representative, but provide a snapshot of local opinion. 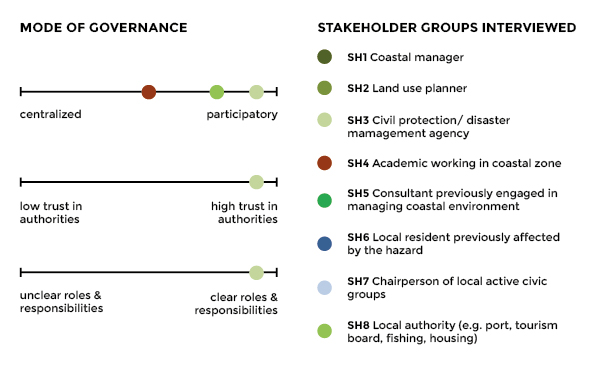 A generally well‐organized rescue system and a protection system against coastal risks have been established in Kieler Fjord. Interviews revealed a high level of confidence in state-organised civil protection. These are moreover bolstered by a number of volunteer organisations deeply involved in DRR. This confidence in authorities may possible have led to less awareness among residents  Indeed, there is some variation in how stakeholders perceive the extent of communication and participation. The interviews suggest that actors and authorities representing state agencies might take a more positive view of participation than an academic stakeholder. Altogether there is an indication that there are clear roles and responsibilities in coastal management.

Exercises and simulations take place on a regular basis

Risk management is handled at the local level and coordination is spread across various responsible agencies who interact at different fora. However at times this may mean that organisational structures are not always obvious.

Somehow we are involved in the disaster risk plan

None of the respondents was able to explain the practical process of civil protection in case of a storm surge.

Furthermore, despite high levels of trust, risk awareness among the people of the region is rather limited. This fact is connected to the rarity of severe flood events; a majority of residents living in higher-lying areas; and a high fluctuation of residents from outside the area with no tradition of coastal flood risk awareness.

The following table provides a list of local policies for coastal protection and disaster risk reduction in Kieler Fjord.