FIGURE 1: MAP OF ADMINISTRATIVE REGIONS IN SPAIN AT NUTS-3 LEVEL3 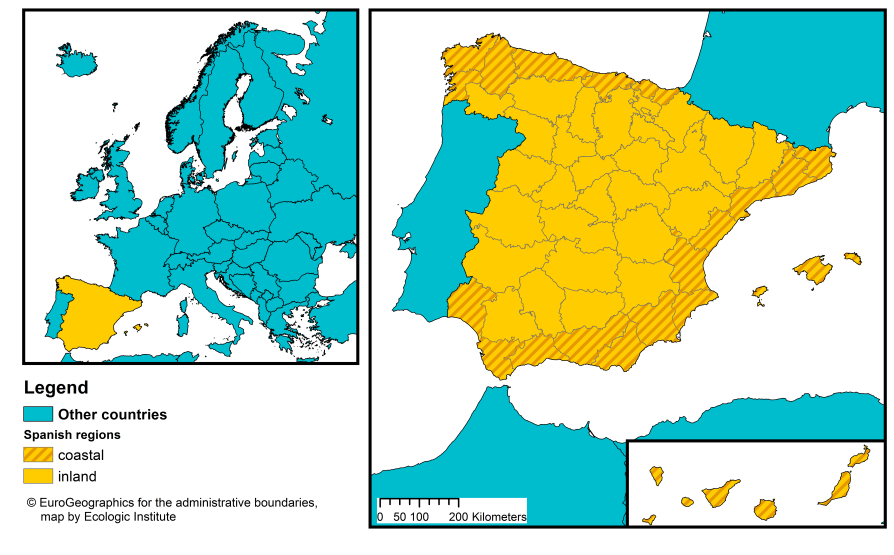 Spain’s power structure is highly decentralised. Since the adoption of the Spanish Constitution in 1978, it has consisted of three primary and distinct levels with differing competencies: National (NUTS-0 level), Autonomous Communities (Communidades Autónomas) (NUTS-2 level) and Municipal (LAU-2 level). Provinces (NUTS-3 level) primarily act in a coordinating role. The Autonomous Communities, the Provinces and the Municipalities each have a range of different competences. The freedoms of the Autonomous Communities are often coupled with strong regional identities which can lead to conflicts and power struggles between centre and periphery.

Depending on the topic, consultation with non-state actors can be institutionalized through advisory bodies, and ministries regularly exchange with important economic and social actors from the public sector (other ministries, autonomous regions, parties) and private sector (e.g. business associations) (Molina et al. 2016). Trade unions, major employers’ and sectoral associations (e.g. fisheries and farming) discuss and accompany policymaking with substantive activities such as training and policy proposals, although in the end these are rarely influential on the official policy process (Ibid.).

The central government and autonomous regions have exclusive or shared competences for a wide range of issues which affect coastal zone management, ranging from urban and spatial planning to biodiversity, water quality and tourism. Urban development and spatial planning for example are entirely within the remit of the Autonomous Communities, and central government cannot legislate on them (Fariña Tojo and Naredo, 2010).

The Ministry of Agriculture, Fish, Food and Environment (MAGRAMA) is the chief government body responsible for the protection and regulation of use of the Maritime-Terrestrial Public Domain (DPTM). Within the Ministry of Environment, the General Directorate for the Sustainability of the Coast and the Sea is the key body for this activity and is tasked with coastal sustainability and conducting integrated coastal zone management in line with EU Recommendation (2002/413/EC) on Integrated Coastal Zone Management. The Directorate General for Coasts works closely with the Secretariat General for Territory and Biodiversity, also based within the MAGRAMA. Although sectoral activities within the Maritime-Terrestrial Public Domain  (e.g. tourism, fisheries, transport) are managed at the national level by the relevant ministry, these activities are subject to permits granted by the Directorate General for Coasts.

In the coastal zone there is an overlap in a number of areas as powers for coastal management are shared among the various levels of administration. As such there is an important need for coordination between the different levels. This is particularly the case for the country’s 487 coastal municipalities that have important competences in town/land planning and use and which ultimately bear the effects of such management decisions (Ministerio de Medio Ambiente, 2006).

Spain has a number of management and advisory bodies to facilitate integration between sectors and different administrative levels involved in coastal management. These bodies also help to create a formal structure for the participation of actors from the private sector. These include Port Authority Boards, the National Commission for Nature Conservation and its different committees, the Environment Advisory Council, National Water Council, National Fisheries Council, and the Fisheries Advisory Committee.

The central government and Autonomous Communities have shared competences for the application of the EU Floods Directive (Directive 2007/60/EC). The elaboration of risk maps for coastal floods along the Spanish coastal zone was conducted by the environment ministry (MAGRAMA, 2013) which has jurisdiction over the Maritime-Terrestrial Public Domain (DPTM). On the other hand, the delineation of areas at risk from river flooding is the responsibility of the autonomous governments at NUTS-2 level. Spain has complied with the implementation timeline for the Directive and has conducted its preliminary flood risk assessment (2011) which were based on an extensive analysis of records, reports, studies, (emergency) plans, press clippings, interviews and surveys. Spain was the Member State to report the highest number of historical flood events (6441) with 6165 (95.7%) with significant consequences (DG Environment, 2012). Spain has also prepared its flood hazard and risk maps (2014) and its flood risk management plans (2015/16). For details of Floods Directive implementation in Spain and other EU Member States, please read the RISC-Kit comparative assessment of Member State implementation of the Floods Directive.

Within the Ministry of the Interior, the Directorate General of Civil Protection and Emergencies is the executive centre that leads the civil protection infrastructure and its representative delegation in sub-national administrative units. It is supported by the Sub-secretariat of the Interior in exercising civil protection powers and responsibilities.

The Delegate Commission of the Government for Crisis Situations (or, Crisis Cabinet) directs and coordinates all actions related to the prevention and high-level management of crises. The main decision maker is the Prime Minister, followed by the Deputy Prime Ministers.

The following section examines some of the specific policies for coastal management and disaster risk reduction in Spain.

4 Eurostat information has been used for the purposes of comparison between countries. Spain's national institute for statistics (INE) applies a different methodology for counting the number of regions: http://www.ine.es/jaxiT3/Datos.htm?t=2852

Ministerio de Medio Ambiente (2006): Integrated Coastal Zone Management in Spain. Report by Spain in fulfilment of the requirements of Chapter VI of the Recommendation of the European Parliament and the Council concerning implementation of ICZM in Europe. 2006. http://www.mapama.gob.es/es/costas/publicaciones/Informe_GIZC_Spain_enviado_tcm7-30301.pdf