This section provides an overview of local coastal governance in the case study area of North Norfolk, England (UK).

As in the rest of England, coastal protection and risk reduction in the North Norfolk case study area is under the jurisdiction of the UK Environment Agency. The EA is supported in this task by the relevant Local Planning Authorities (North Norfolk District Council (for the eastern half of the study area); Borough Council of King’s Lynn and West Norfolk (western half); and Norfolk County Council (entire frontage)) and inputs from two statutory stakeholders (Natural England (the UK Government representatives for conservation, habitats and species), English Heritage (the UK Government Representatives for the historic environment)) and two partner organisations (Wells Harbour Commissioners, Norfolk Coast Area of Outstanding Natural Beauty (AONB) Partnership).

As described in the overview of governance in England, Shoreline Management Plans (SMPs) provide the ‘intent of management’ and associated policy (Hold the Line, Advance the Line, Managed Realignment and No Active Intervention) for each section of the shoreline for the short, medium and long term up to 2105. Regionally, SMPs are coordinated by ‘Coastal Groups’ – in this case the East Anglia Coastal Group, which covers the region from Gibraltar Point in the north, to the River Thames in the south, incorporating 5 different SMPs.

In co-operation with other responsible organisations, the Anglian Eastern Regional Flood and Coastal Committee has oversight of the management of coastal and fluvial flood risks in North Norfolk and assists in identifying the needs of the local community and where investment should be targetted.  Although the Chair is appointed by Central Government, it also contains local representatives appointed by the Lead Local Flood Authorities (in this case the Norfolk County Council).

The response to a storm surge in November 2007 was hailed as an example of all the key agencies and voluntary organisations working closely together. Eight severe flood warnings were issued and 27,000 calls were made to local responders and residents. A total of 17,500 houses in Great Yarmouth, Norfolk and Suffolk were identified by the Environment Agency as being at risk. More than one thousand people were evacuated, and the Floodline number received 5,000 calls per hour. The Environment Agency activated demountable defences to protect a power station supplying 31,000 homes. Water rescue teams were mobilised from surrounding municipalities.

Civil protection in the UK is governed by the Civil Contingencies Act at the national level. This act is described in the overview of governance in the UK. The local response is coordinated via local Resilience Forums, whose location is based on police areas; in the North Norfolk area, this is the Norfolk Resilience Forum (NRF). The NRF also holds training events. For example, they coordinated Exercise Harmony during Norfolk Prepared Week in September 2013. This was an enactment of the response of local voluntary and faith groups to an imaginary emergency.

There are several ways that North Norfolk residents can be warned about upcoming hazards.  Flood warnings are disseminated via media broadcast, via the internet and also via a telephone  messaging system, operated by the Environment Agency. A separate system exists for Category 1 and Category 2 responders (see overview of governance in the UK). This system is operated by the Flood Forecasting Centre, which is a partnership between the Environment Agency and the Met Office. This became operational in April 2009, following the Pitt Review of the UK summer floods of 2007. When necessary, the Flood Forecasting Centre sends a message to these responders, who then enact local emergency plans. These plans include aiding the evacuation of vulnerable people and ensuring that everyone has evacuated exposed areas.

Coastal governance under the Shoreline Management Plan (SMP) for Old Hunstanton to Kelling Hard is primarily governed by state and statutory stakeholders, although with the participation of two non-state actors: Wells Harbour Commissioners and the Norfolk Coast Area of Outstanding Natural Beauty (AONB) Partnership. Civil society and private sector actors are largely constrained from direct action by this planning and management framework. However, there are some instances where landowners are allowed to maintain their own defences (e.g. RSPB Reserve at Titchwell, Royal West Norfolk Golf Club at Brancaster) if these actions can broadly fit within wider regional shoreline planning. Independents with relevant experience are also appointed to the Anglian Eastern Regional Flood and Coastal Committee.

In the case of an emergency, local volunteer flood wardens aid the police in contacting at risk individuals to ascertain if they are going to stay in their property or be evacuated to an emergency centre. Flood wardens also provide assistance and facilities at evacuation centres and offer advice and information to the public throughout the year. The list of flood wardens is maintained by the parish councils, groups concerned with local governance in individual villages and their hinterlands. The flood wardens are integrated into a wider emergency framework - the Norfolk Resilience Forum (NRF) - encompassing Environment Agency emergency planning and implementation, police, fire, ambulance and coastguard services. The NRF is responsible for planning the response and recovery to potential hazards in Norfolk, including storm surge flooding.

The graphic below provides a snapshot of how governance in North Norfolk is perceived by those living and working in the area. The responses are the result of in-depth interviews conducted with 17 coastal stakeholders from eight stakeholder groups (SH1,2,3,4,5,6,7,8) presented in the list on the right. Interviewees who commented on the mode of governance are plotted on the graph on the left. As these interviews come from a low number of interviewees they are not necessarily representative, but provide a snapshot of local opinion. 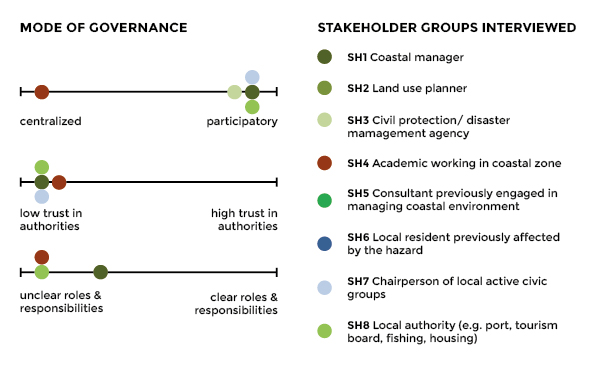 As the stakeholders perceptions indicate, there are some examples of participation good practice e.g. in the second generation Shoreline Management Plan (SMP). However, outside of this particular activity, there is concern that the participatory process between civil society and private sector groups and the Environment Agency (less so with the local authorities) is not as good as it might be; there is a lack of trust in central government taking account of local needs, particularly when it comes to the enforcement of planning decisions; and a lack of clarity in roles and responsibilities in the aftermath of major flooding events, particularly when moving from the local to more regional scales.

A number of properties, such as housing and hotels, are already in risk zones, which leaves them vulnerable and in some cases without recourse to defence measures. This is considered to be due to weakness of knowledge sharing between municipalities and coastal defence authorities as well as poor management.

Planning ‘not robust enough’ to deal with big storm surges

Coastal plans have no teeth to stop inappropriate construction

At the same time, local stakeholders see that there is a lack of coordination between the relevant public bodies.

Another challenge in implementing effective coastal zone policies is funding and financial coordination. Government cuts have resulted in reduced staffing and resources for local DRR measures. For example, Norfolk Tourism, an agency that had a strong stake in coastal management, has disappeared. There is a general sense at the local level is that not enough money is spent on flood defence. This has negatively affected trust in the Environment Agency and Natural England.

The people ‘on the ground’ don’t exist anymore

The following table provides a list of local policies for coastal protection and disaster risk reduction in North Norfolk.