Figure 1: Map of administrative regions in Germany at NUTS-3 level3 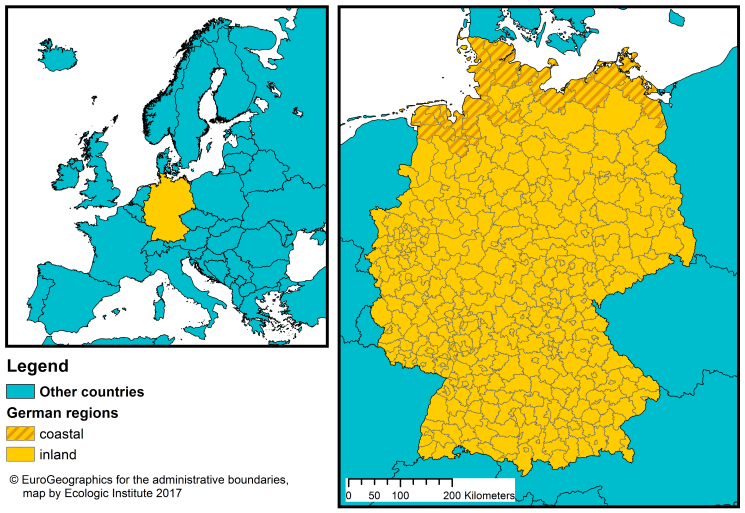 Germany is a federal republic divided into 16 federal states, known as Länder, which have their own constitutions. The bulk of legislation is enacted at the federal level, but administratively the Länder are the predominant bodies, and have the right and the duty to act according to their interests unless otherwise specified by the German Basic Law (Grundgesetz) (CoR, 2012). A major reform of the German Basic Law in 2006 included the right of federal states to deviate from federal legislation in six areas, including environmental protection.

The organisation and administration of coastal defence in Germany is the sole responsibility of the coastal federal states (i.e. Schleswig-Holstein, Lower Saxony, Mecklenburg-Vorpommern) and administrative units with special status as coastal regions (i.e. Hamburg and Bremen). Capital coastal protection measures are open to co-financing of up to 70% from the federal government (NUTS-0 level) whereas the maintenance of existing structures is financed 100% by the respective federal state (NUTS-1 level) (PRC/MRAG, 2009).

The federal government does engage in coastal protection through funding research via the Federal Ministry of Education and Research (BMBF). The BMBF has designated the North Sea and Baltic Sea as key regions for sustainable development and has placed a particular focus on climate change research through initiatives such as the Radost Project. The Coastal Engineering Research Council (KFKI) is an amalgamation of federal and coastal state administrations engaged in coastal research. Its aim is to record and forecast natural processes and anthropogenic interactions along the coast. It funds projects that address issues such as sea/dyke interaction and probabilistic model approaches to coastal flooding.

The federal government takes a more direct role in spatial planning, particularly marine spatial planning and integrated coastal management. Spatial planning for the EEZ is performed by the the Federal Ministry of Transport and Digital Infrastructure (BMVI) in cooperation with corresponding federal agencies. The BMVBS led the public participation procedure to determine the principles and targets of EEZ spatial planning in both the North Sea and Baltic Sea. It is supported by the Maritime and Hydrographic Agency (BSH) for preliminary work.

The federal body with a leading role in the field of Integrated Coastal Management (ICM) is the Federal Ministry for the Environment, Nature Conservation, Building and Nuclear Safety). The ICM Advisory Council is an interdisciplinary and supraregional body established in 2008 that consists of relevant authorities across administrative levels. These include officials from federal government departments, the coastal Länder and central municipal associations. The last meeting was held in 2013.

The EU Floods Directive 2007/60/EU has been transposed into national law with a legal requirement that each federal state must consider a 100 year return probability as a medium probability. The Directive is implemented by the governments of the 16 federal states (NUTS-2 level).

National coordination of the implementation of the Floods Directive is carried out within the existing Permanent Working Group on Water Issues of the Federal States and the Federal Government (Bund/LänderArbeitsgemeinschaftWasser (LAWA) and within each river basin community. In 2009 the LAWA adopted the “Approach of the preliminary assessment of flood risk according to the EU Floods Directive”. This common approach provides a framework for producing a preliminary flood risk assessment under Article 4 and 5 of the Directive. The LAWA also prepared "Recommendations for creation of Flood Hazard and Risk Maps" in preparation for reporting on Article 6 the Floods Directive. The reporting on flood hazard and risk maps was completed on schedule in 2014 covering Germany's ten units of measurement. Flood risk management plans (2015) are available for the Bremen, Hamburg, Lower Saxony, Mecklenburg-Vorpommern, and Schleswig-Holstein regions. (For details of Floods Directive implementation in Germany and other EU Member States, please read the RISC-Kit comparative assessment of Member State implementation of the Floods Directive.) 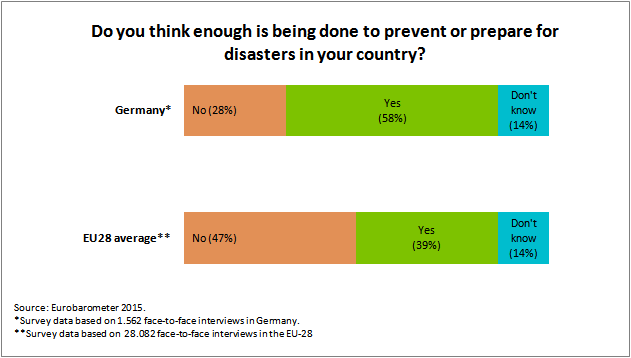 According to the German Basic Law, the federal states (NUTS-1 level) are responsible for all disaster management in peacetime. In situations of national defence, the federal government takes over the emergency response.

If the disaster exceeds local and regional capacities, the authorities may call upon the Federal Office of Civil Protection and Disaster Assistance (BBK) for additional support. This agency is a part of the Ministry of Interior. Its role includes supplementary civil protection and planning for the protection of critical infrastructure. It also functions as a service center for all administrative levels. In extraordinary situations, the BBK takes on a coordinating role and provides information, expertise and resources.

The following section examines some of the specific policies for coastal protection and disaster risk reduction in Germany and identifies strengths and challenges to be addressed.

The Risc-Kit project has identified some of the main strengths of the German policies for coastal protection and disaster risk reduction as well as challenges to address.

COMMITTEE OF THE REGIONS (COR). 2012. HTTPS://PORTAL.COR.EUROPA.EU/DIVISIONPOWERS/COUNTRIES/MEMBERSNLP/germany/PAGES/DEFAULT.ASPX