This section provides an overview of the Floods Directive and its implementation in the MS, with a focus on coastal flooding

The Floods Directive (FD) 2007/60/EC is the European legislation for managing flood risk from floods of all flood types (fluvial, pluvial, sea water, groundwater, artificial water bearing infrastructure). It has a particular focus on riverine and coastal floods (Art. 2) and regards water flows in the natural entity of river basins (defined in Article 3.1 Water Framework Directive 2000/60/EC). Coastal waters are assigned to these river basin districts as well as are groundwater bodies. The implementation of the FD is streamlined with the Water Framework Directive (WFD) in order to increase the synergies of river basin management and flood risk management measures. As the both Directives are implemented in coordination with each other, the Floods Directive is also indirectly linked to the implementation of the Marine Strategy Framework Directive.

The Floods Directive entered into force in 2007. Its main implementation milestones for the period 2007 – 2015 include the production by Member States of Preliminary Flood Risk Assessments, Hazard and Risk Maps and Flood Risk Management Plans. The FD outlines the goals, methods and implementation schedule that each Member State has to fulfil for each of these milestones. They shall be reviewed on a rolling basis, to take into consideration - among other changing aspects - the impacts of climate change. In the following section, the milestones and Member State implementation (in Risc-Kit case study countries) and reporting are described in more detail.

Preliminary Flood Risk Assessments were based on available data and had to be published by the end of 2011. All Member states apart from Portugal complied with the deadline. At the time of writing (2017), all assessments were published. The assessments include (Article 4 of the FD)

A review of the submitted Preliminary Flood Risk Assessments shows that coastal floods account for 16% of the reported historical flood events, after fluvial (66%) and pluvial (20%) floods. Despite being a coastal country, Sweden did not include sea water floods in its risk assessments. It will rectify this omission in the updated risk assessment in 2018. Germany and the Spanish mainland included all potential flood types in their assessments for all management units. For the Canary Islands, only sea water floods were reported. Among coastal Member States, Germany, Spain, France and parts of the UK (Scotland) provided complete reports that fully complied with Article 4 of the Directive. The delineation of management units in Italy was particularly problematic, in particular for the north-east of the country. Here, the boundaries are not in accordance with the hydrological units. (For more information see Nixon et al. 2015).

The preliminary flood risk assessment led to the identification of Areas of Potential Significant Flood Risk (APSFR, see Figure 1) for which Flood Hazard and Risk Maps (FHRM) were to be developed by the end of 2013. The maps were required to include floods with low, medium and high probability. If it is considered that in coastal areas adequate protection is in place, only low probability (high magnitude) scenario maps need to be prepared. The maps should be developed:

Examples of Member State FHRMs can be found here. 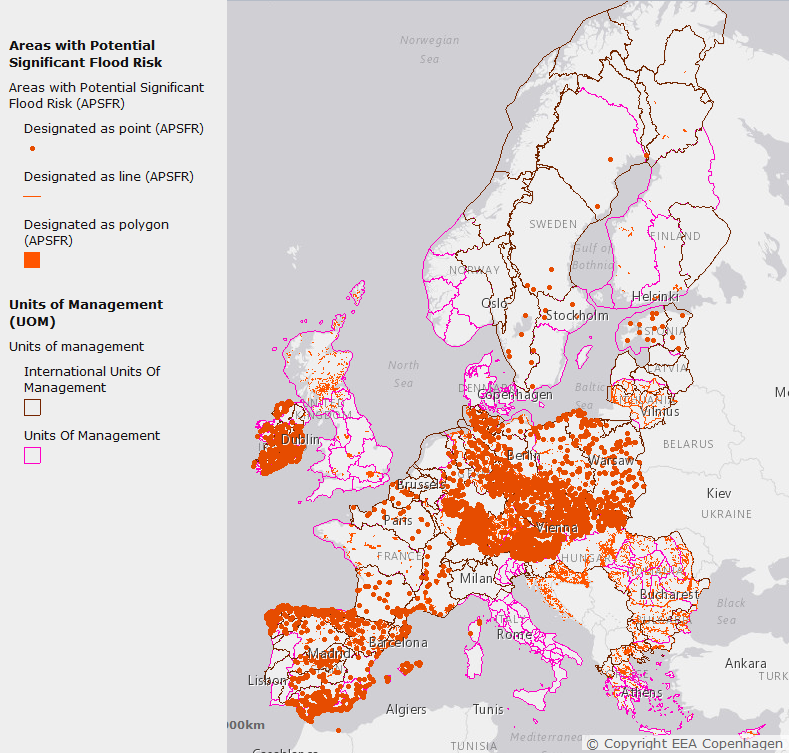 A review conducted by Nixon (2015), provides an overview of methodologies applied in the preparation of FHRMs. Germany, Spain, France, Italy and the UK created FHRMs specifically for coastal floods, in contrast to Belgium that reported coastal floods in combination with fluvial floods. Bulgaria, Portugal and Sweden did not provide maps for coastal floods at all. They were produced for the medium and low probability scenario (see Table 1, Bulgaria is not included in the assessment). Apart from Belgium and Spain, these countries also published maps for the high probability scenario.

Only five Member States in total – including Belgium, Italy and the UK – reported flow velocities in their hazard maps. Other aspects, like flood extent and water depth/level were reported in all maps. Climate change was only included for few regions or Member States. Scotland considered climate change for all flood types, whereas Germany included climate change impacts in particular for the coastal flooding scenarios. Spain, increased the number of APSFRs identified in the preliminary flood risk assessment due to coastal flooding. Spain like Germany, took existing coastal flood defences into account in its FHRM. Germany reported furthermore, that the risk of failure of those defence structures has been assessed and thus the adequacy of the structures estimated.

Table 1: Summary of coastal flooding scenarios mapped by member states under the floods directive with associated expressions of probabilities

†   mapped in combination with fluvial flooding

*   No reporting carried out

** No mapping carried out

/  not included in mapping

Flood Risk Management Plans were to be prepared for each river basin district by the end of 2015. These should be developed in accordance with the 2nd River Basin Management Plans under the Water Framework Directive (WFD) and outline the following points:

At the time of writing (January 2017),  the Flood Risk Management Plans have not been collected to view on the Water Information Service Europe (WISE) portal. However, most of them have been produced and can be viewed on the pages of the national or regional management authorities (See Table 2 below).

Both the European Commission as well as EU-funded research projects have produced a range of guidance documents to help Member States fulfill the reporting requirements set out in the Directive. Some examples include:

Handbook on Good Practices for Flood Mapping in Europe http://ec.europa.eu/environment/water/flood_risk/flood_atlas/