Figure 1: Map of administrative regions in Bulgaria at NUTS-3 level3 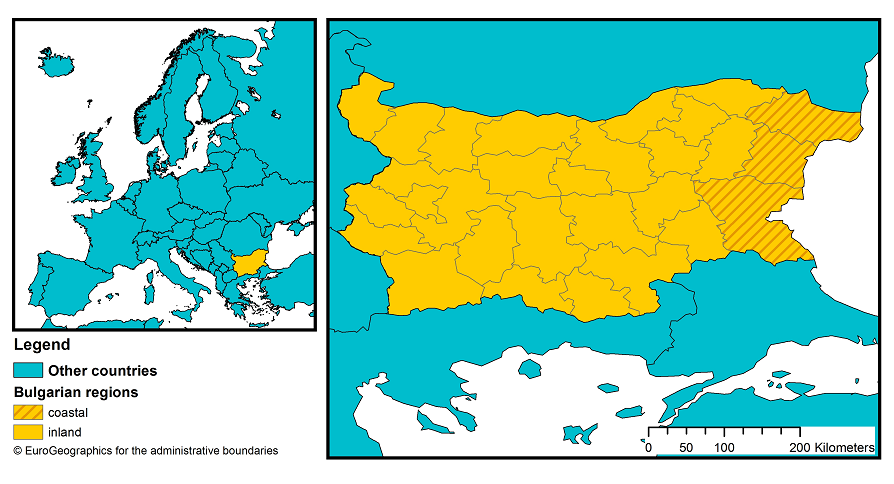 Bulgaria is a highly centralised State: its 28 districts (Oblasti ) (NUTS-3 level) are devolved divisions of the central Government. Representatives are not directly elected and Districts are fully dependent on the State's budget (CoR, 2012).

In the process of joining the EU in 2007, Bulgaria made substantial changes to its administrative structures (Ganev et al. 2016). At regional level (NUTS-2 level), new regional development councils and channels for coordination and common decision-making were created to facilitate participation in EU policy making. Central government also delegated a range of activities to municipalities. Municipalities (Obshtini) LAU-1 level) are the only level at which self-government is exercised and are less dependent on State financing (CoR, 2012).

Non-state actors are engaged through different channels, the most important of which is the ‘National Council for Tripartite Cooperation’. Here, the two main trade unions are given a voice and consult with government and business on policy proposals. More than 70 advisory councils at different levels of government represent non-economic interest groups representing e.g. environmental issues. In practice however, the impact of these councils on policy is limited and activities tend to focus on activism (Ganev et al. 2016). Membership in civil society groups tends to be substantially lower in post-communist societies than in older democracies and post-authoritarian regimes, and Bulgaria has one of the lowest membership of all post-Soviet states (Howard, 2002).

The general public is seen to have an endemic lack of trust in public institutions and formal policy making processes (Ganev et al., 2016; Stoyanov et al., 2014) possibly also as a legacy of communism (Howard, 2002). Voter turnout was 51% at the last election, as compared to the EU 28 average of 68 % (Eurostat, 2016b).

Corruption is also an ongoing challenge - more than 13% of Bulgarian citizens had been engaged in corruption at least once in 2012 – 2013, (CSD 2013). EU membership coupled with slowly rising incomes and increased transparency of the public sector have brought higher civic activism and have put increasing pressure on corrupt politicians and businesspersons (Stoyanov et al., 2014). Nevertheless, the allocation of public resources remains characterized as particularistic and unpredictable (Ganev et al., 2016).

In Bulgaria, coastal protection, as well as the financing of coastal protection measures, is primarily a matter for central government. The predominant institutional responsibility lies with the Ministry of Regional Development and Public Works and its former executive agency, now state enterprise, Geozashtita. The Ministry of Regional Development and Public Works oversees the development of the coastal spatial planning Master Plan. It also oversees the adoption of strategies for development at the regional, district and municipal level as well as the reporting of their implementation and evaluation every 7 years. Geozashtita’s work includes research, design and implementation of measures to stabilize landslide areas and weak soils. The Ministry of Environment and Water is responsible for developing the national coastal zone policy as well as risk assessments and maps of coastal areas. The Ministry of Transport is responsible for developing national policies for navigational waterways.

The EU Floods Directive 2007/60/EU is implemented by the Ministry of Environment and Water, through its four River Basin Directorates via the 2010 Water Act. Thus far, Bulgaria has conducted its preliminary flood risk assessment (December 2011) . As of March 2015, Bulgaria was the only Member State that had failed to submit its flood hazard and risk maps. However, a flood risk management plan (2015) is available for the Black Sea region. 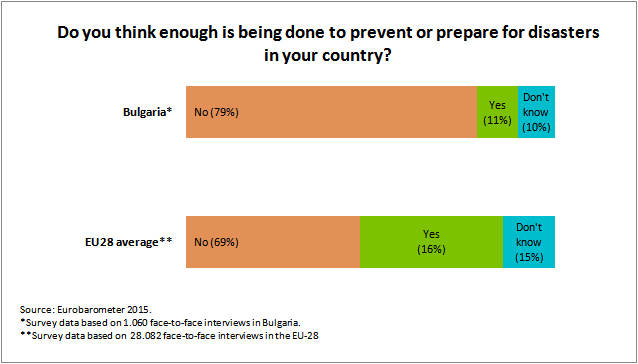 Central responsibility for disaster risk reduction and management lies at national level with the Ministry of Interior. It mandates, monitors and penalises (the lack of) compliance with Disaster Risk Reduction (DRR) laws and ordinances. The Fire Safety and Civil Protection Directorate General (FSCP DG) is the national specialized unit within the Ministry of Interior for preparedness, rescue and protection in case of disasters, including floods. FSCP DG is structured into a central level administration and 28 district structures (one in each district (oblast)).

The governor (at regional/district level) and mayor (at municipal level) are responsible for the coordination and management of civil protection, prevention and preparedness activities. A Unified Response System obliges all potentially dangerous sites, e.g. dams or industrial sites, to have local warning systems and has alert systems for key actors at a regional level. In the case of a disaster, the mayor announces the state of emergency, manages information exchange, coordinating with the regional governor if necessary and reporting regularly to the Ministry of Interior.

The following section examines some of the specific policies for coastal management and disaster risk reduction in Bulgaria and identifies strengths and challenges to be addressed.

The Risc-Kit project has identified some of the main strengths of the Bulgarian policies for coastal protection and disaster risk reduction as well as challenges to address.

Committee of the Regions (CoR). 2012. https://portal.cor.europa.eu/divisionpowers/countries/MembersNLP/Bulgaria/Pages/default.aspx