Italy's coastline borders the Adriatic, Ionian, Tyrrhenian and Ligurian Seas within the Mediterranean Sea basin. Around 60 % of the population (36.589.822 inhabitants) live in coastal regions1, as compared with the EU-28 average of 42 % (Eurostat, 2015).2 66 of Italy's 110 provinces (Province) are coastal (see Figure 1).

Figure 1: Map of administrative regions in ITALY at NUTS-3 level3 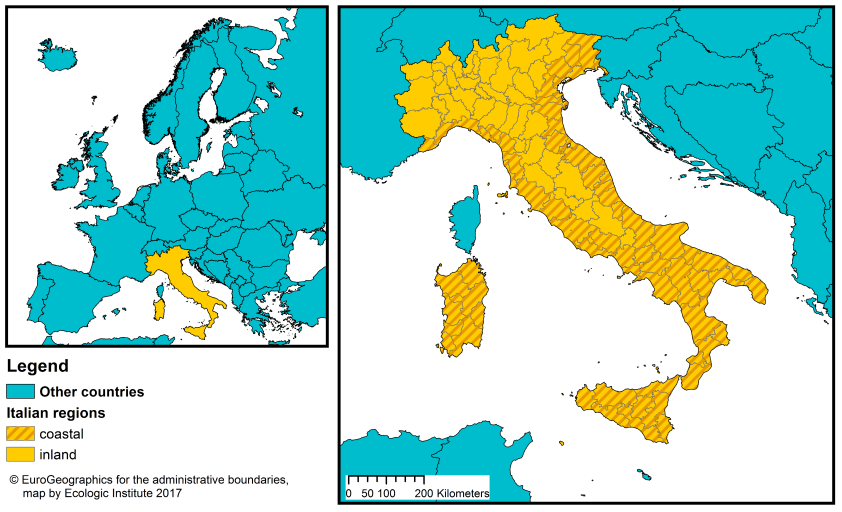 Italy is considered a 'regionalised' country (CoR, 2012) in which traditionally all levels of administration (Regions, Provinces and Municipalities) may adopt their own statutes. Fifteen regions (Regioni) (NUTS-2 level) have 'ordinary' status, while five others have special autonomous status. Every region has a statute which acts as a regional constitution.

Up until 2016, the 110 provinces (Provincie) at NUTS-3 level constituted both a level of local self-government and a devolution of the central Government. Recently some of the competences for the environment have been transferred from the provinces to the Regional Government and/or Municipalities. Municipalities (Comuni) at LAU-2 level have a general competence for local affairs and may have competences delegated to them by the State or the Regions.

Italy made important constitutional and legislative changes in 2000/2001 that increased the autonomy of the regions. However, both centre and periphery have showed considerable resistance to the implementation of these reforms and an unprecedented number of conflicts have appeared before the Constitutional Court (Vesperini, 2009). Central government now has an increasing number of overlapping competences with regional government. In such cases, rather than restricting itself to defining general guidelines, the national government often impinges upon regional autonomy (Cotta et al. 2016). Fiscal cuts to local authorities (often perceived as the culprits of unrestrained spending) have further increased tensions (Ibid.).

Management of coastal areas is highly fragmented and - as described above - suffers from a considerable overlap of competences between levels of the administration. The Ministry of Environment and Territory and Sea has been working with ISPRA (Istituto Superiore per la. Protezione e la Ricerca Ambientale), the National Research Council (CNR), Regional Authorities, Catchment Basin Authorities and Universities to establish a National Working Group on Coastal Erosion (Tavolo Nazionale sull’Erosione Costiera-TNEC). The TNEC produced "National Guidelines for Management of Coastal Dynamics"  in November 2016, with the aim of finding sustainable solutions to the problem of coastal erosion from an integrated and coordinated perspective.

The experiences of major flood and landslide disasters such as in Polesine (1951), Vajont (1963), Florence (1966), Valtellina (1987), Piedmont (1994), Crotone (1996), Sarno (1998), Soverato (2000), and Piedmont (2000) have been key in shaping the country’s flood risk governance. It took almost two decades to reach political consensus on the law 183/89 of 18 May 1989. However, the eventual legislation introduced several key principles of effective water and flood risk management, later embraced when applying the EU Water Framework Directive (2000/60/EC) and the EU Floods Directive (2007/60/EC). The L. 183/89 adopts river basins as planning and management units and includes key principles for coastal flood and erosion risk planning and management. The legal framework on competences (incorporated in the L. 183/89 followed by the D.Lgs. 152/2006) is well defined, even if complex. Nevertheless, there is a failure to implement measures at national level (Barbano et al., 2013).

At the time of submitting the Italian preliminary flood risk assessment reporting (2012), selected river basin districts and regions in central and northern Italy had initiated flood hazard and risk maps. The reporting on Italian flood hazard and risk maps was completed on schedule in 2014 and made available links to national flood risk and flood hazard maps for 47 of its 51 units of management (four UoMs were merged with another UoM for mapping purposes).  Flood risk management plans were produced in 2015 in line with the implementation schedule. 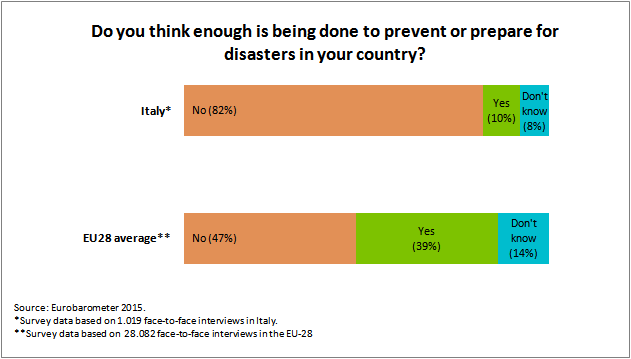 In Italy, DRR strategies are mostly produced at Regional (NUTS-2) or Municipal (LAU-2) level. Operational activities on the ground are usually coordinated by Regional Civil protection agencies. Law 100/2012 (in amendment of Law 225/92) defines the general framework for civil protection at national and local levels. Regional laws are produced separately in accordance with guidelines from the national law.

National level DRR is the competence of the Department of National Civil Protection, which coordinates national activities and participates in EU (e.g. DG-ECHO) and international fora (e.g. Hyogo framework). The Italian National Platform for Disaster Risk Reduction was formally created by a Decree of the Prime Minister issued on 18 February 2008, to ensure full implementation of the Hyogo Declaration and of the Hyogo Framework for Action in Italy. Wrongly, there is a perception of low risk of significant damage from tornados, sea surges and tsunamis for the Italian territory, despite the fact that these risks exist for may parts of the country like Sicily (tsunamis), NE Adriatic (surges) and most coastal and inland regions (tornados) . Consequently, preparedness, alert procedures, mitigation activities and search and rescue organisation for these impacts are consequently not well developed.

The following section examines some of the specific policies for coastal management and disaster risk reduction in Italy.

Committee of the Regions (CoR). 2012. https://portal.cor.europa.eu/divisionpowers/countries/MembersNLP/ITALY/Pages/default.aspx

NATIONAL GUIDELINES FOR MANAGEMENT OF COASTAL DYNAMICS, PRODUCED BY THE EC IN APRIL 2015: http://www.minambiente.it/sites/default/files/archivio_immagini/Silvia%20Velo/tnec-llgg_nazionali_difesa_della_costa_dallerosione_9nov2016.pdf