FIGURE 1: MAP OF ADMINISTRATIVE REGIONS IN FRANCE AT NUTS-3 LEVEL4 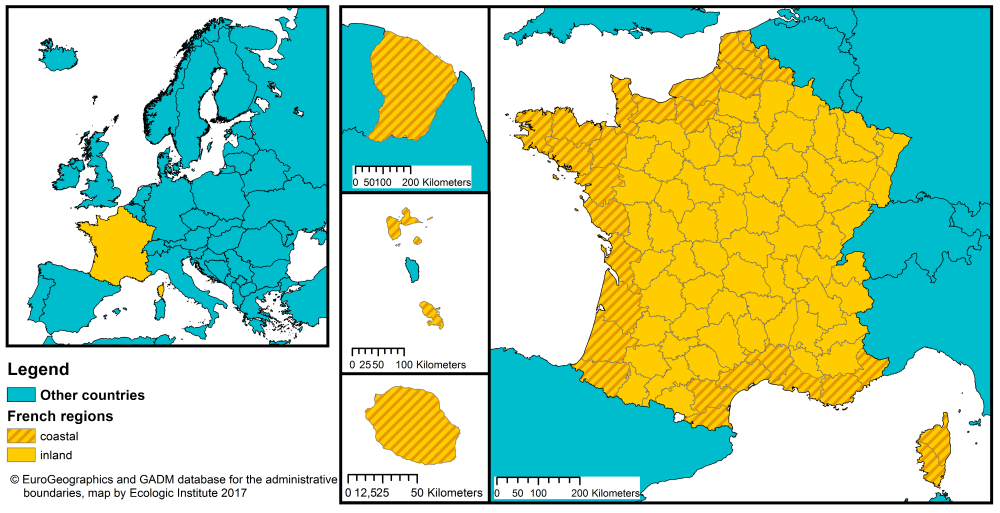 France is a unitary and decentralised state. Territorial reforms5 approved in 2015 have seen the 22 metropolitan regions (Régions) (NUTS-2 level) reduced to 13 regions.6 These regions no longer have the right to act on all matters of local public interest: regional powers are now limited to issues determined by national law. These areas of regional competence include rural development, major infrastructure and roads, fire and rescue services.7

The number of departments (Départements) (NUTS-3 level) is unchanged by the new law. With regards to planning, the departments continue to be responsible for land use planning and water management. They also maintain responsibility for emergency and rescue operations in the case of natural disasters. However, the management of inland and coastal ports can from now on, be transferred by the State to other territorial units e.g. regions.

Under a new law, the creation of local development plans has now been transferred away from Municipalities (Communes) to the inter-comunal level.8 Mayors nevertheless retain the ability to block or transfer planning decisions and to issue individual planning authorisations, including building permits.

Organised and united interest groups (e.g. in agriculture) can have substantial influence that amounts to co-decision making with government (Mény et al. 2016). However, engagement and consultation with the civil society on government proposals is often carried out too late for any substantive changes to be made (OECD, 2016). Top-down approaches have provoked in many cases severe, repeated conflicts and protest movements that have often successfully vetoed governmental action (Mény et al. 2016). More recently, however, governments have sought the consultation of interest groups more systematically, in some cases as a legal obligation (Ibid.).

In France, coastal management is primarily the responsibility of the national government. However, national-level consultations on a new maritime policy (2008-2010) have placed more emphasis on decentralization and integrated management of the seas and coasts. Certain services have thus been decentralised to Directorates at the NUTS 2 (Région) and NUTS 3 (Département) levels.

Coastal and maritime policy falls under the remit of the Ministry of Environment, Energy and the Sea (MEEM), supported by the Directorate-General for Infrastructure, Transport and Sea and in particular its Directorate of Maritime Affairs (DAM) which defines, coordinates and implements maritime policy. Also of relevance to coastal risk reduction, the Directorate-General for Planning, Housing, and Nature develops, coordinates and evaluates policies for construction, landscape, biodiversity and water.

At regional (NUTS-2) level, the Interregional Directorates for the Sea (DIRM ) are decentralized services that coordinate and carry out State policy for the sustainable development of the sea, management of resources and regulation of maritime activities. The DRIM are made up of four individual regional agencies to cover the entire coast of mainland France. Each DIRM coordinates with other relevant authorities and represents interests with regard to maritime activities e.g. fisheries. They also approve regulatory measures and establish necessary licensing. Each DIRM is assisted by Regional Directorate for the Environment and Coastal Management (DREAL), which is in charge of land use planning and environmental issues.

At Départment (NUTS-3) level, the Directorates of the Territories and the Sea (DDTM ) operate under the authority of the Departmental Prefect and are responsible for risk reduction, implementation of marine, coastal, environmental, agricultural, housing and land-use planning policy. The three Maritime Prefects (Atlantic, North Sea, Mediterranean) are the relevant authorities for marine pollution incidents, order at sea, maritime safety, and the creation of NATURA 2000 areas.

The National Council for Nature Protection (CNPN) is a consultative and administrative body responsible for providing guidance on protected areas. As such, the CNPN contributes to discussions about implications of risk reduction efforts, such as raising dykes, for protected areas. The  National  Coastal  and  Ocean  Council (CNML) functions as  a  consultative  body for the management, protection and development of the sea and the coasts, with a view to integrated coastal zone management. The CNML  represents various stakeholders, including the national and local governments, the private sector, the civil society and associated experts.

The current roadmap for delivering on Flood Risk Management Plans under the EU Floods Directive is seen as an opportunity to merge all existing plans that have been elaborated so far at local scale (Plan d'Action de Prévention des Inondations, Plan Prevention des Risques Littoraux, etc.). France has complied with the implementation timeline for the Directive and has conducted its preliminary flood risk assessment (2011), prepared its Flood Hazard and Risk Maps (2014) and its Flood Risk Management Plans (2015).

The civil protection structure in France, like the coastal preparedness and marine spatial planning structure, is organised at national, zonal and departmental levels. The occurrence of a crisis activates the operational center at each level. Disaster risk reduction (DRR) policy is led at national level by the MEEM with the support of the Association for Natural Disaster Reduction (AFPCN). In this role, it heads the Platform for Disaster Risk Reduction, which functions to gather national and local authorities, agencies and civil society stakeholders to shape and coordinate DRR policy. Platform activities include:

Meanwhile coastal emergency response is organized by the Ministry of the Interior, which is responsible for civil protection and crisis management. The Ministry of Interior plans, prepares and coordinates resources among all administrative levels throughout the territory.

As an agency of the Ministry of Interior, the Directorate of Civil Defence and Security (DSC) is the main national authority tasked with civil protection against both man-made and natural disasters such as storms and other weather hazards. It is assisted in operations by the Operational Inter-Ministerial Centre for Crisis Management (COGIC), which coordinates emergency resources and provides full-time monitoring and reporting of any disaster events or rescue operations. The relevant Maritime Prefect (Atlantic, North Sea or Mediterranean) is responsible for monitoring operations as well as safety and rescue operations at sea.

Emergency resources are also coordinated at a zonal level from six operations centres in different cities across the country and at the Département level (NUTS-3 level), where each prefect (administrator) is responsible for the distribution and management of resources in the department. The department prefect and the mayor of each municipality share responsibility at the local level for risks and rescue and recovery operations e.g. through the Department Fire and Rescue Services (SDIS). ORSEC (Organisation de la Réponse de Sécurité Civile) plans serve as generalized emergency plans for natural disasters such as floods or severe storms. These plans are used at both national and departmental levels and are triggered when local capacities are insufficient. The SDIS also has a specialised emergency plan similar to ORSEC that is oriented toward “wave/surge” events.

The following section examines some of the specific policies for coastal protection and disaster risk reduction in France.

The Risc-Kit project has identified some of the main strengths of French governance of coastal protection and disaster risk reduction as well as challenges to address.

3 INCLUDING OVERSEAS DEPARTMENTS AND TERRITORIES

4 NOMENCLATURE OF TERRITORIAL UNITS FOR STATISTICS

6 France has 18 administrative regions in total (13 metropolitan, and 5 overseas).