This section provides an example of local coastal governance in the case study area of Ria Formosa, Portugal.

In order to reduce coastal erosion, the Strategic Plan sets forth as its first point:

In the case of Faro Beach - the focal point of the Ria Formosa case study - the corrective measures include the removal of the residential buildings located in the risk zones within the primary dunes. More specifically, this involves relocating families/individuals whose first residence is in Faro Beach; removing second residences from the coastal barrier; and recovering the beach and dunes.

To carry out the removal of buildings in the context of the Strategic Plan, there are two separate plans:

The central 2 km of Praia de Faro do not belong to the Portuguese public maritime domain but belong to and are managed by the municipality while the rest of the coast is mainly managed by APA – Algarve. The POLIS programme applies to the whole area of Ria Formosa and decisions are taken in between partners, i.e. the APA, Natural Park and municipalities.

The Hydrographic Regional Administration from the Algarve was responsible for the relocation and removal of buildings at Ria Formosa as defined under the Strategic Plan. It began this process after a series of destructive weather events in the winter of 2009/2010. Following this, the Administration demolished second homes, implemented elevated pathways (e.g., to access Praia de Faro) and dune fences at the places were the houses were demolished and installed beach facilities such as bars and WCs (e.g., Fuseta Island). The responsibilities of the Hydrographic Regional Administration have now been taken over by the Algarve Environmental Protection Agency.

Flood risks are not fully accounted for. At a certain level of implementation (mostly related to the Water Directive and the Flood Directive), risk assessment and mapping of coastal areas do not seem to encompass the complexity of the problem as they only focus on the threats related to flooding, which, as mentioned above, does not apply to the case study area. A more detailed and proper risk assessment is thus needed.

There is no clear disaster risk reduction mandate or strategy. Plans do not include any measures related to preparedness or early warning. This is partially derived from the fact that the main focus is on complete removal of the communities at risk (see above). . The plans that have been conceived (i.e. the Intervention Plan for Faro Island and the Detailed Plan for Faro Beach) are not being fully implemented. Interviewed stakeholders  suggested this could be due to various factors including limited budgets, social tensions or different political priorities.

There are various local associations that represent different communities and non-governmental actors. Among them are two to three fishing communities, each with its own representatives.  In addition, there are home owner representations as well as one association for campsite residents.

Residents of Culatra Island is a community-based group that is actively involved in coastal issues all year round. Most other groups only act when there is a given issue involving their interests. However there is no joint organisation that represents the community with one coherent voice. In general, there has been a lack of active discussion and participation in the case study area. Local residents are also not invited to the early discussions or indeed for the most of the decision-making processes until the stage of public consultations shortly before final project approval. This results in plans that do not reflect the needs and claims of local communities, and exclude aspects of importance such as cultural preservation. This results in a generally low level of trust between governmental and non-governmental actors. Groups of non-state actors in the area mostly interact with local and regional government organisations and very rarely with national ones.

The graphic below provides a snapshot of how governance in Ria Formosa is perceived by those living and working in the area. The responses are the result of  in-depth interviews conducted with 13 coastal stakeholders from five stakeholder groups (SH1,2,3,4,6) presented in the list on the right. Interviewees who commented on the mode of governance are plotted on the graph on the left. As these interviews come from a reduced number of interviewees they are not necessarily representative, but provide a snapshot of local opinion. 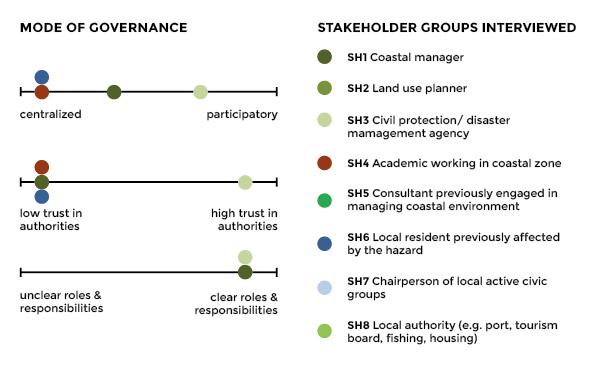 The relocation and demolition of buildings as part of the Strategic Plan has been controversial. This has contributed to low trust in authorities in the view of most stakeholders, though a government civil protection representative did not share this view. Indeed, this centralised approach is evident in the very limited dialogue between stakeholders and coastal managers. Productive dialogue between coastal managers and local residents is a desired goal. It was mentioned that communication between academics and coastal managers needed to be addressed to improve the scientific basis for coastal management decisions and their political rationale. At the same time, several stakeholders suggested that various roles and responsibilities were clear.

The low trust in authorities likely stems from a lack of communication with residents, especially in such dramatic matters as demolitions and relocations.

Authorities inform rather than communicate with residents

Civil protection agencies have a relatively high level of confidence that local residents in Ria Formosa have intuitive knowledge and methods that allow them to cope when coastal disasters strike.

Some local residents, however, have expressed their concern that they do not have sufficient knowledge about early warning or evacuation procedures.

The only warning we get comes from the news

Some coastal managers recognize the need for a disaster reduction strategy, which has so far not materialised. This has been alternately attributed to either a lack of funds or political courage.

Implementation is hindered by the lack of money

Political courage, not money, is the issue

The following table provides a list of local policies for coastal management and disaster risk reduction in Ria Formosa.