Figure 1: Map of administrative regions in sweden at NUTS-3 level3 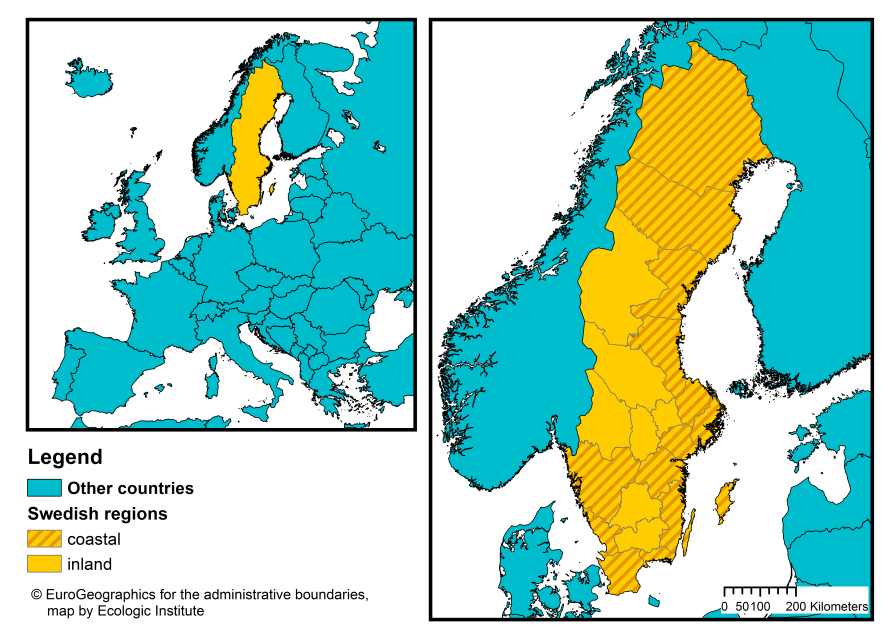 Sweden is a unitary and decentralised State that has three levels of governance: central, County and municipal (CoR, 2012). The country is divided into 21 counties (Län) (NUTS 3-level) and 290 municipalities (Kommuner) (LAU 2-level). County governors are appointed by the national government while municipality administrations are locally elected. The Swedish Constitution recognises local self-government. The strength of local autonomy can at times lead to a fragmentation in governance and coordination (Pierre et al., 2015). At the same time, situations of extraordinary national crisis can lead to increased pressure from central onto local government; where negotiations with the Swedish Association of Local Authorities and the Regions (SALAR) are unsuccessful, it can lead to the introduction of stronger regulatory measures (Ibid.).

Traditionally, Sweden has followed a coporatist model of governance. The corporatist model describes a system where State decision-making is based on negotiation or consultation with representatives of key companies or other interest groups (Kenworthy, 2003). Stakeholders are thus given an opportunity to influence public policy from the early stages of the policy process until implementation (Pierre et al., 2015). While the basic elements of this approach remain, there has been a process of decorporatisation since the late 1980s creating a change in the relationship between the government and major interest organizations (Lindvall and Sebring, 2007). The institutionalized interactions with established organizations have now become more ad hoc and strategic, replaced by a new tendency towards consultation with broader society (Pierre et al., 2015).

In Sweden, coastal management is largely the domain of local government. Spatial planning falls under the jurisdiction of municipalities, and coastal protection measures must in most cases be initiated by private property owners, with municipalities acting as a coordinator for those affected (PRC/MRAG, 2009). Financing for coastal defence measures is either borne by property owners or co-financed up to 80% by municipalities and/or the Civil Contingencies Agency (MSB).  Such co-financing does not include risks related to coastal erosion or those in newly built-up areas (PRC/MRAG, 2009).

At the national level, coastal issues are governed by the Ministry of the Environment and executed through the Swedish Agency for Marine and Water Management (SwAM). SwAM is responsible for preparing marine spatial planning policy and is legally obliged by the Marine Spatial Planning Ordinance to apply an ecosystem approach in the preparation of marine spatial plans. Three distinct marine spatial plans (for the Gulf of Bothnia, Baltic Sea, and Skagerrak and Kattegat) are currently being developed. A stakeholder consultation is being run from December 2016 - April 2017 and neighbouring countries will be consulted on sketches of the plans in May 2017. SwAM is furthermore involved in the management of risks related to climate change and flooding, as well as coastal protection through its responsibility for biodiversity conservation in maritime areas, where it evaluates defence measures at the local level and reports to the national level.

SwAM coordinates the implementation of the Water Framework Directive 2000/60/EU and 5 Water Authorities have been established under the responsibility of the County Administrative Boards. The EU Floods Directive 2007/60/EU in contrast, is primarily implemented by the Civil Contingencies Agency (MSB), through a Government Ordinance (1998:905). In this role, MSB has conducted its preliminary flood risk assessment (2012) and identified 18 areas with potential significant flood risk (MSB, 2011) as well as its report on historical flood events (MSB, 2012). Due to the lack of a detailed Digital Elevation Model, Sweden did not include sea water floods in its risk assessment. It will rectify this omission in the updated risk assessment in 2018. Sweden submitted its flood hazard and risk maps (2014) and flood risk management plans (2015) according to the Floods Directive implementation schedule.

Formally, the requirements of the Floods Directive have been implemented according to the EU schedule. Informally the implementation has received some criticism for not being as inclusive and consultative as it should be. MSB seems satisfied with what it is achieving in this area, but there has also been published criticism that general adaptation measures in Sweden are left to the municipality: consequently, they are often too local and only focusing on a few technical structural measures. An example of identified gaps in the application of the directive at local level can be found in Johannessen and Granit (2015).

There is no integrated, national-level flood risk strategy or plan in Sweden. Instead, the issue is scattered across different policy areas, each of which has its own flood risk instruments (Ek et al., 2016) However, central authorities e.g. the MSB at the national and regional levels are in charge of preliminary assessments, maps and planning as well as provision of data and information for use at sub-national level. Other national agencies, including the Civil Contingencies Agency, the National Board of Housing, Building and Planning, and the Environmental Protection Agency contribute through regulatory guidance.   There are several research institutes and universities engaged through consulting activities to provide expert knowledge, such as the Center for Erosion Damage (Erosionsskadecentrum) or the Swedish Meteorological and  Hydrological  Institute  which provides decision-making support through data, simulations, analyses.

The County Administrative Boards (Länsstyrelsen) are the regional representatives of the State, and provide background information for the planning of the municipality as well as to individuals in preparation for e.g. decisions for construction or measures to mitigate erosion. The County Administrative Boards can also stop developments in light of health or security concerns.

Municipalities at the local level are the chief actors in implementing concrete flood risk measures (Ek et al. 2016). Following a policy change in 1996, responsibilities for risk, preparedness and safety were transferred from the national to the municipal level. Though this has not generally changed municipal flood planning in Sweden (Boverket, 2001), it has meant that in some cases, e.g. the RISC-KIT case study site of Kristianstad, it has mandated the municipal level to take an active initiative for coastal defence (Johannessen and Hahn, 2013). On one hand, this decentralised  approach  has allowed decisions  to be  tailored  to  local  conditions; on the other, municipalities vulnerable to flood risks may not always have sufficient financial and knowledge resources (Ek et al., 2016). 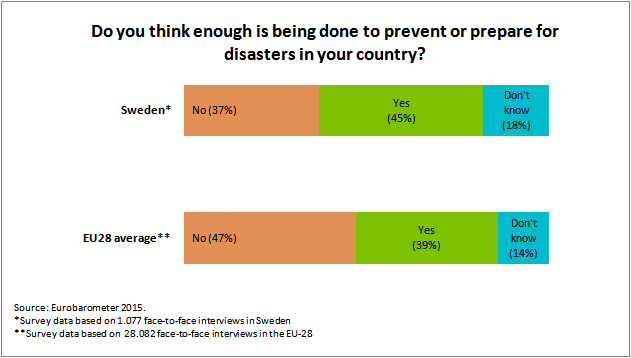 A compilation of management documents and strategies shows that Sweden’s work on natural disasters is relatively well regulated in the form of laws, and instructions to the authorities. It furthermore has a well-functioning collaboration in the areas of natural disaster prevention and emergency work.

Disaster risk reduction (DRR) and management in Sweden takes place at the national, regional and local levels. The Swedish Civil Protection Act is the legal framework for DRR in Sweden. It is based on three main principles:

The municipal level (LAU 2- level), in accordance with the principle of proximity, is the main actor in the emergency activities, as well as in the local implementation of prevention, preparedness and emergency planning.

At the regional (NUTS 3) level, the main DRR actors are the 21 County Administrative Boards (one per Län) that support coordination at the regional level and offer assistance to 290 municipalities at the local level. The County Administrative Boards are responsible for the implementation of training, risk analysis related to land use, dissemination and information sharing.

At the national level, the Ministry of Defence carries central responsibility for civil emergency management, planning and coordination. Each office is responsible for its specific sector or area but coordination is ensured by a joint cross-sector approach. Within the Ministry, the Crisis Management Coordination Secretariat is charged with handling cross-sector emergencies as well as routine management.

Under the Civil Protection Act, the Swedish Civil Contingencies Agency (MSB) participates in a coordinating role but does not take over the responsibilities of other actors. The MSB is mandated to manage the entire spectra of threats and risks, from everyday accidents to major disasters, including flooding. This mandate also includes:

- coordination across sectors and jurisdictional boundaries and levels of responsibility.

- prevention of natural hazards and support for development cooperation on humanitarian assistance and early recovery.

- provision of state support for municipalities to finance preventive and adaptation measures to climate change, and to mitigate landslides or other natural hazards.

- support for municipalities and county administrations with mapping of areas at risk of natural disasters such as earthquakes and flood risk areas (see above Flood Risk Management).

The Swedish Rescue Services Agency works with natural disasters, landslides and floods, in particular when settlements are threatened. They are also responsible for general mapping and support for preventive measures. The Swedish Geological Survey is tasked with developing a knowledge base on geological conditions on land and at sea. All national-level authorities that are relevant to DRR are expected to carry out their own vulnerability assessments and take measures to strengthen capacities. They are also expected to engage with the business sector, County Administrative Boards as well as municipalities.

The following section examines some of the specific policies for coastal management and disaster risk reduction in Sweden.