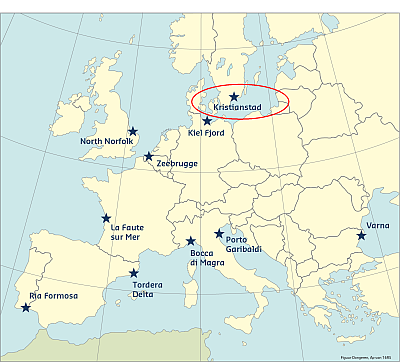 The geographical focus of the case study is the coastal zone of the municipality of Kristianstad, which consists of a sandy beach and dune landscape, following the Hanö Bay, where the Helge River discharges and drains into the Baltic Sea. The lower Helge River catchment contains Sweden's lowest point at 2.41m below Mean Sea Level, as well as two shallow lakes with a total area of 22km2, making the site Sweden’s largest flooded meadows landscape.

Kristianstad Municipality offers an especially complex case with a combination of various ecosystems, economic sectors, the lowest lying areas of Sweden, and multiple hazards related to both marine and river floods affecting the municipal capital and surroundings. It is furthermore involved in a number of processes and activities of interest for the management of risks related to climate change and flooding.

There are substantial variations within the site in both temperature and precipitation with, in general, colder and wetter areas on high ground in the southwest and north, and milder, dryer areas along the coast. In the coastal area a narrow stretch of dunes is surrounded by water providing a form of natural protection. The distinctive morphology and geology of the area, the interface between lakes and running water and the brackish water of the Baltic Sea, and the variations in local climates have created unique conditions for a diversity of land cover types that support a large number of ecosystems and species in the site area.

The extent to which the area has been affected by human intervention varies considerably. The densest concentration of population is in the town of Kristianstad, which is centrally situated in the area, whereas on the coast it is the urban area of Ahus. There are a number of small communities and villages on the Plain of Kristianstad, while the forested areas remain somewhat sparsely populated. During the summer there is a significant increase in the number of temporary residents with some 1700 vacation homes along sections of the coast.

Coastal risks  in the municipality of Kristianstad have not been addressed the same way risks to floods from the river basin in the city have. The main vulnerabilities on the coast have been identified as beach erosion in combination with sea level rise, which provides a great potential risk to the people living on the coast, about 10 000 people in Åhus and 5-7 000 people living temporarily in small houses along the beach (many of which have been allowed to become permanent settlements), to the tourism industry which provides Kristianstad with an income, and to important infrastructure and residential areas.

The Öland storm/Emma storm, 1985, was not well predicted, which led to a number of studies. Swedish meteorologists often use this storm as a point of departure for discussing prognosis methodologies. In this case it was a jet stream that had activated the low pressure, which was a weakened tropical cyclone “Ana“ (SMHI, 2014b).

The Swedish Metrological and Hydrological Institute (SMHI) has a research unit for meteorological analysis and prognosis and works with developing mathematical models to be used in super computers. SMHI makes the prognoses based on a global model from the European weather centre ECMWF. The model focuses on Scandinavia with a grid of 2,5 km and length of 2 x 24 hours. SMHI is also working with smaller prognoses and simpler methods and higher details (so called nowcasting). There is also ongoing work with quantifying the uncertainty in the prognoses and probabilities for the result. Most of this is done with colleagues in international projects (HIRLAM, ALADIN), but also with colleagues within SMHI.

Storms in Sweden are monitored by the Swedish Meteorological and Hydrological Institute (SMHI) and occur mostly during the autumn and winter. They are often caused by temperature differences between the polar air from Arctic areas and the warmer air from the Mediterranean. For a long time the border between these airstreams west of Sweden and where extreme weathers develop at Southern Greenland. One would assume that most storms would primarily hit the west coast, but this is not the case. There are almost as many storms on the east coast as the open waters of the Baltic Sea opens up for conditions for intense extreme weather.

Storms have been recorded around Kristianstad since 1566, which is one of the earliest records of storms (SMHI 2001). In the 19th century, two storms (in 1850 and 1872) ravaged the coast. A web page on Yngsjö reports that two older “eel huts“ were taken away by the storm in 1872.

In the beginning of the 20th century, there were two significant storms (1902 and 1904) with extreme sea levels and air pressures pushing the Southern Baltic Sea from Kattegatt as well as the eastern parts of the Baltic Sea. In Ystad, the neighboring municipality, sea levels were 169 cm above normal between December 30 and 31, 1904, which is still the record for the Southern part of Sweden. In 1902 the sea was, according to SMHI, reported to be about 1 000 m from the normal shoreline, and several houses had to be evacuated by their inhabitants, “who with danger to their lives sought refuge higher up.” (SMHI 2014a). Other storms occurred in 1969 ,1967, 1985, 1999, 2005, 2007 and 2011. The storm in 2005, “Gudrun”, was the most severe, causing significant damage to the forest in the region and thus indirectly affected the fishery and water quality according to local fishermen. Fallen trees contributed to increased erosion and sedimentation which eventually reached the sea.