This section provides an example of local coastal governance in the case study area of La Faute-sur-Mer, France.

Coastal protection is primarily a national level task, however, some responsibilities are delegated to sub-national levels. The Regional Directorate for the Environment and Coastal Management (DREAL) is in charge of land use planning and environmental issues at regional level. In the context of La Faute, it was decided to let the Henriette lagoon site evolve naturally and prevent human intervention as much as possible. The same position has been taken regarding the pine forest in the south of the territory.

In France, the Floods Directive is implemented through a so-called PGRI (Management Plan for Inundation Risks), elaborated for each large-scale river basin. For La Faute-sur-Mer, the corresponding river basin is the Loire-Bretagne basin. The PGRI for the Loire-Bretagne includes six main objectives: (1) preserve the capacity to flush floods and preserve expansion zones that can be useful to mitigate floods, (2) include risks in the planning and management of territories, (3) reduce damages and risk to life in areas prone to flooding, (4) integrate flooding protection structures in the global framework, (5) improve the awareness of resident with respect to flooding risks, (6) improve the preparedness to flooding and the resilience after a crisis.

Much of the current local disaster prevention and rescue planning has been developed since 2010 when France was badly hit by storm Xynthia. Since the Xynthia storm event in 2010, DRR measures have been undertaken under two main plans that are relevant for this study: the PCS (Community Safety Plan) and the PPRI (Flood Risk Prevention Plan). The first plan concerns the emergency measures and actions in case of floods. It is based on the Hazard Study Document (Etude de Dangers) which was ordered by the municipality. The second concerns the adaptive measures of the town regarding its hazardous location.

Prevention measures in the PPRI focus on procedures for dyke maintenance and making dykes more efficient. An early warning system is ready to be activated as soon as Météo-France, the national meteorological service, gives the alert. The plan also divides the town into coded zones according to degree of hazard.

In the implementation of the PPRI, land zoning measures have been especially contentious. In June 2012, 525 properties were acquired in the solidarity zone as part of PPRI measures. The fact that authorities purchased only the houses for compensation and not the land meant that land owners were left with nothing. In the red zone, people can no longer build and property prices have also gone down along with the economic crisis. This means that red zone properties have lost value due to the new regulations but without any compensation.

Both the PCS and PPRI are imposed by the Vendée department (at NUTS-3 level) on the local community. In 2015, the PPRI was cancelled in the administrative court and thus a new plan is under development. The new plan (the PPRL)  is still under elaboration and should be approved in the end of the first quarter of 2017. It will also take new hazard maps into consideration.

DRR measures concern mostly the urban developed part of the town with a strong emphasis on the low lying residences. Economic activities located in the town center have been the focus of a special attention that will be discussed in the new plan. Regarding campsites in lower areas, there was no other choice than to close them.

AVIF (Association of flood victims in La Faute-sur-Mer) is a local group created soon after Xynthia which supports (including legal support) victims, commemorates those who lost their lives and promotes awareness raising about Xynthia and lessons learned from the catastrophe.  “Demain La Faute” is a similar association that supports local populations in legal procedures for financial compensation after Xynthia and aims to boost local development in its aftermath. Both groups participate in public debates about coastal defense strategies. They are very active in informing the local population, maintaining a memory of the catastrophe associated with Xynthia. However, the two associations are supported by different fractions of the local population creating a somewhat uneasy relationship.

Coeur de Mer is an association that gathers 6 surrounding municipalities where sailing activities take place and aims to promote this leisure activity but plays no particular role in coastal protection in la Faute-sur-Mer.

The LPO (League for the Protection of Birds) is a national association to protect birdlife and biodiversity. The Vendée department where La Faute is situated includes more than 800 members. The LPO co-manages the Saint Denis du Payre natural reserves surrounding la Faute-sur-Mer, controlling its highly restricted access takes part more broadly in coastal management of the La Faute area.

FDSEA (Département Federation of Farming Trade Unions) is the main local organization of farmers at Département (NUTS-3) level, accounting for around 4600 of the 10,000 trade union members in the Vendée department. Local farmers constitute a strong lobbying force and promote traditional coastal defense strategies in order to prevent from any flooding in their crops. Although FDSEA has no official mandate to contribute to the definition of coastal defense strategies it has a significant impact through powerful lobbying. Indeed, the surrounding crops are some of the most productive in France for corn and wheat and therefore, any flooding has important economic impacts.

The graphic below provides a snapshot of how governance in La Faute-sur-Mer is perceived by those living and working in the area. The responses are the result of 5 in-depth interviews conducted with local resident previously affected by coastal hazards. Interviewees who commented on the mode of governance are plotted on the graph on the left. As these interviews come from only one type of stakeholder group, they are not representative, but provide a snapshot of local opinion. 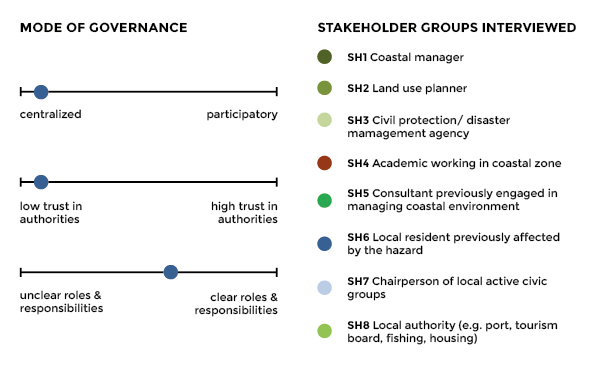 Local residents interviewed indicated that governmental roles and responsibilities are relatively clear. They found that the local municipality has taken a certain responsibility regarding risks, improving the dikes and developing different DRR plans.  However, interviewees implied that the local population is not really consulted by any of the governmental levels, and does not receive enough information.

The PPRI land zoning measures are not equally favourable to all property owners. Property owners in the red zone receive public financial support to take flooding protection measures. However, this support is provided for expenditures that amount to a maximum of 10% of the property value. This effectively favours larger properties. Significantly, it limits support for the construction of the most effective protection measure, which is an extra floor or “rescue area,” for the smaller properties that may need it most.

Despite the existence of the Community Safety Plan (PCS), there have been insufficient preparation activities and exercises. Residents do not know how to react according to the plan in emergencies . In other cases, implementation has been overly ambitious. Official phone calls to residents warning of storms, for example, have been made too often and for minor storms.

Although a number of public discussions have been held to answer the need for DRR measures imposed by state services, local residents feel that they were not consulted.

Nonetheless, the local partners from the Risc-Kit project highlight that many of the community's ideas  are actually parts of the PCS measures and have already been implemented.

The effectiveness of the Community Safety Plan, namely the dykes, has been questioned. There is no way to quickly evacuate water that has flowed over the dykes and entered the town. In other cities, residents have noted the dykes abruptly end to make way for waterfronts for commercial buildings. Thus residents feel that even with all the new measures, the new plan leaves the town vulnerable.

Planning has not done enough to secure town's future

Since the Xynthia Storm event in 2010, DRR measures have been undertaken under two main plans that are relevant for this study. Both plans are imposed by state services on the local community.