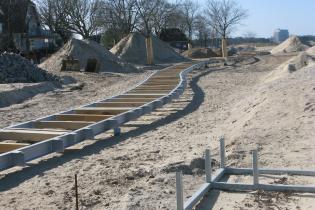 The municipality of Timmendorfer Strand developed and implemented a coastal protection strategy using a participatory process. This process was a key element for the successful implementation of the measure. Although this measure was very expensive, a cost-benefit analysis shows that the benefits are higher than costs.

Case Study description of the BASE project

The municipality of Timmendorfer Strand is a German coastal municipality and seaside resort located in the state of Schleswig-Holstein. The community has around 9000 inhabitants with tourism as the main economic sector.

Tourists come for the sea

Around 15% of the area is situated less than 3 m above MSL and therefore flood-prone lowland with previously no flood protection measures installed. From 1998 to 2011, the municipality of Timmendorfer Strand developed and implemented a coastal protection strategy using a participatory process. The flood protection strategy was successfully developed by local stakeholders, municipalities and coastal defense authorities.The final measure was basically a dyke protecting the area. But the main outstanding aspect of the measure was the participatory approach, which consisted of three main elements: an assessment of economic values, the participatory approach itself, and an idea competition.

An analysis of various social and economic parameters was performed. With these data and scientific principles, an innovative method for active public participation (the so-called sensitivity analysis) was applied. The results of this participatory process were used as a basis for a design competition among selected consultants. These three steps (valuation, sensitivity analysis and the competition of ideas) were used for the first time in a participatory ICZM-process. 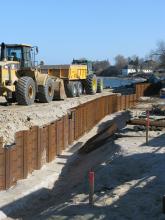 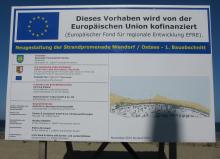 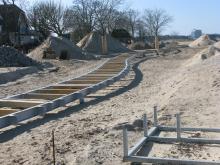 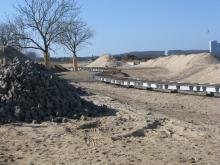 The process was initiated by the Schleswig-Holstein State Ministry responsible for coastal protection and had strong support from the Mayor of the coastal town. First attempts by state authorities to heighten defences through artificial structures (walls) were turned down by the municipalities (which are the main decision-makers in coastal defence) in fear of reduced revenues from tourism as a consequence of limited sea views and narrowed beaches (Hofstede 2004).

To find the best solution for all involved stakeholders, a participatory approach was initiated. But firstly assessment of economic values in the community was conducted (see Reese 2003). It showed the damage potential in case of a flooding. Socio-economic parameters, like persons employed, tourist bed capacity, economic assets, or yearly gross value added were evaluated. The results highlighted the need for coastal protection and were basis for the following sensitivity analysis, the part with the actual participatory approach.

The participatory approach was based on a computer-aided model, where possible future developments under different scenarios were simulated at different sessions with stakeholers. In total nine working groups meetings and two public meetings were held. Results from these meetings are published (in German) by Kaul & Reins (2001). Focus of these meetings was the question of how different coastal protection measures would affect the community with the assumption of increasing risks of flooding due to climate change.

As results of this approach, the participants supported the results of the sensitivity analysis and recommended a combination of coastal protection and flood defense measures. They also agreed upon further involvement in the process of the implementation of the coastal defense measure. The coastal defense administration valued this approach very positive, because the participants recognized the long-term risk for the coastal area, they accepted responsibility, and they “evolved from skeptics to advocates of an integrated coastal defense concept” (Hofstede 2001: 5).

The results of this approach were basis of a following ideas competition, where four engineering offices were asked to develop innovative ideas for the coastal defense measure. The execution on site started in 2006 and was finished in 2011.

Objectives of the measure are reducing the damages by storm surges by protection of human health and economic infrastructure. Maintaining tourism was a precondition for building the dike, because the community is economically highly relying on the tourism sector. The coastal defense measure that was built, integrated in the landscape of the town and not really visible or noticeable for visitors. Therefore the success of the measure was not only the safety issue, but also the nature of the measure (being integrated in the landscape). New techniques were tested, for example glazed retention walls were used, so a sea view could be maintained. Additionally a landscaping-project was implemented. The finishing and landscaping-project focused e.g. on the improvement of the beach promenade, two new boardwalks – established in the dunes - and recreational infrastructure, e.g. benches, playground. These are not per se a coastal protection measure, but are necessary to get the support of the local stakeholder.

The total investment costs are estimated for the dike (coastal protection) project with 18 mio. Euro, from which 3.5 mio €. were paid by the local community. The other share was mainly financed by the Federal State of Schleswig-Holstein.

In parallel to the realised coastal protection-project a finishing and landscaping-project was implemented. The finishing and landscaping-project focused e.g. on the improvement of the beach promenade, two new boardwalks – established in the dunes - and recreational infrastructure, e.g. benches, playground. The costs of this additional effort were 12 mio. Euro. 6 mio. Euro were financed by the local community, the other half was mainly paid by EU funds (Lehners 2011a). Maintenance costs will be covered by the community of Timmendofer Strand.

For the EU project BASE (see Meyer et al. 2015) costs and benefits of the implementation of coastal protection in Timmendorfer Strand were quantified. Two scenarios were used: Minimum scenario referred to a sea level rise of 0,30 m and an according increased frequency of flood events; maximum scenario shows a seal level rise of 0,50 m and the following increase in flood events.

Estimated costs include investment and maintenance costs of the coastal protection measure and cost related to the architecture finishing and landscaping project. Different benefit components were considered in the analysis: avoided flooding, change of recreational function and tourism due to finishing and landscaping project, change of number of travellers to community, change of property values and qualitative assessment of change of turnover of restaurant owners.

The implemented measure was compared to a business-as-usual-scenario – with no implementation of the coastal protection measure and the finishing and landscaping project. The two different estimated scenarios differ in the impacts of the climate change, change of property value, additional tourism and maintenance costs.

For both scenarios, the estimated benefits exceed the costs of the measure (net present value between 92 and 220 Million Euro). The estimated benefits are between 4 and 8-times higher than the estimated costs (Benefit-Cost-Ratio). The investment-upfront costs are the major type of costs with 30 million Euro (for both scenarios) and the main type of benefits are avoided damages by storm surges (71.5 Million for minimum, 170 Million for maximum scenario). Also the additional tourism shows substantial benefits, ranging between 45 and 72 Million Euro. The undertaken sensitive analysis showed that for all scenarios and all used discount rates benefits are higher than costs.

Through the participatory process, participants “evolved from sceptics to advocates of an integrated coastal defence concept” (Hofstede & Schernewski 2005). For example the glazed retention walls or the landscaping works would not have been realized without the participation of the citizens.