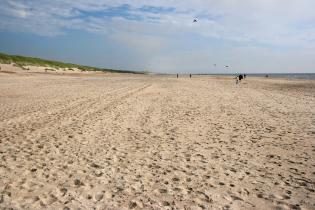 The case study shows how sand replenishment at the west coast of Denmark has become the main measure to face coastal erosion. Experiences in the last years showed, that replenishments at the foreshore seem to be the most effective and ecosystem friendly version of beach nourishments.

A sea level rise due to climate change will enhance the erosion processes. The partly low-lying areas in the hinterland are protected by an up to 10 km wide belt of dunes. Without coastal defense measure coastline recession of up to eight m a year in some places could occur. In 1981 a particularly severe storm has lead to land losses of up to 30 m in some coastal areas. Especially in places with relatively narrow dunes, with some less then 100m wide for example at the Ringkøbing Fjord, this is seen as a problem. For more than 30 years this problem is faced by the replenishment of sand on the beach and in near shore areas.

In 1983 the Danish Coastal Authority (Kystdirektoratet) started in cooperation with the local municipalities’ coastal protection in this area by implementation of slope protection, breakwaters and nourishments. Since then, more than 59 million m³ of sand have been replenished. Usually the sand is removed 5-10km offshore by boat an than either being dumped on the sandbar or placed directly on the beach. Average annual costs for this approach are approximately € 10 million per year.

Up until the 1990s, 145 breakwaters were built to reduce the sand transport from the beach. While these elements could only slow down the erosion rate, employment of nourishment has meant that the recession has been brought to a halt. This is the reason why today, the work almost only consists of nourishment.

Since the 1990s coastal protection at the Danish west coast was mainly undertaken by sand replenishments and partly hard protection measures the foot of a dune or dyke. The construction of breakwaters and revetments was phased out to the end of the 1990s. Today sand replenishment is used almost exclusively. Lately, replenishments at the foreshore are favored because they seem to be more effective than the traditional nourishments at the beach. Although nourishments at the beach are effective in the short term, Danish research results demonstrate that nourishment in the foreshore lead to stabilization of the beach and are more cost effective over a certain period of time. But beach nourishments are still undertaken to protect the foot of dunes. Continuous monitoring showed that the formerly high erosion rate has been reduced to an average of 0.1 m since 1998. Further research is needed to clarify which grain sizes are most effective to resist erosion. In general the composition of the nourished material should correspond to the natural conditions.

In retrospect, the implementation of sand replenishing measures (rather than ‘hard’ coastal defense measures) required are a lot of political will. Today, there is a fundamental shift from "hard" to "soft" coastal protection measures in Denmark acknowledgeable. However, there are still many hard structures existing interfering with the natural processes. Although being partly ineffective, a substantial deconstruction of these structures has not been initiated yet.

The Danish example shows that replenishments at the foreshore seem to be the best environmentally sound and most effective of beach nourishments. Compared to ‘traditional’ beach nourishment schemes, this approach is less costly and saves energy in the long term, and additionally the beach remains free from tubes.

Ecological studies have shown that biocoenosis at the seabed where the sand extraction took place mostly recovered after a period of one year. But this should not be generalized because, because the recovery rate depends highly on the structure of the seabed and the type of sand extraction.

Concerning the place of the nourishment, Danish studies show that the local fauna needed two to three years for recovery. Moreover, it was noted that the animals found were smaller than before the nourishment.

This example from the west coast of Denmark shows that by using beach nourishment coastal erosion can be slowed down on a large scale and can also be sufficient for the protection of settlements. The introduced sediment can additionally serve as a buffer for an accelerated sea level rise. For sandy beaches this example shows that ‘soft’ coastal measures should be preferred over ‘hard’ coastal measures where possible. In addition, old ‘hard’ structures should be removed, if they have been proven to be counterproductive against erosion. If the protection can be achieved with replenishment of sand, this method should be favored, because it’s more nature-friendly can create co-benefits for tourism and recreation.